The History of Buellton California

1920 is the year that the last of the five towns of the Santa Ynez Valley was established, Buellton. However, looking back into the history of the area, the Buell Ranch was a complete town within itself as far back as 1875. By that date R.T. Buell had established a general store, a post office, bunkhouses, blacksmith shop and family homes.

R.T. Buell was born in Essex, Vermont on November 12, 1827 to Linus and Hannah Buell, his forbearers coming from England many years before. R.T. grew up on a farm, learning all the trades, as well as receiving a good education, as he attended Oberlin College in Ohio for three years.

In 1850 he traveled to Kentucky to teach at the Pine Grove Academy, near Columbia. Being in a southern community in the years before the Civil War, R.T. learned first hand about the conflict of ideology between states.

In 1853 the reports of the discovery of gold in California convinced R.T. to try his luck in the far west, so he returned to Essex to say goodbye to his family. He boarded the Yankee Blade in New York for the long trip around Cape Horn to San Francisco.

After 100 days of ocean travel the steamer arrived in San Francisco, and with 54 cents in his pocket, R.T. headed for the gold fields at Bidwell's Bar.

Mining was hard work, and not every one struck it rich, so by 1856 R.T. was farming the bottom lands of the Feather River in Sonoma County. Farming was his first love, and came natural to a son and grandson of farmers.

A year later, in 1857, R.T. started a successful dairy farm with 13 cows at Point Reyes, in Marin County. Eight years later he moved to Monterey County, near Salinas, and opened a dairy farm there with 800 cows. While there, R.T. also edited a newspaper.

During these years his brother, Alonzo Wilcox Buell, arrived in California, having traveled the overland route. The two brothers decided to buy land further south that they had seen advertised in a local paper. The land that was for sale was located in the Santa Ynez Valley, and was a Mexican land grant owned by Jose Maria Covarrubias and Joaquin Carrillo of Santa Barbara.

The winter of 1864 and 1865 had been very dry, forcing many farmers to sell off land to their creditors. It was this land that interested the Buell brothers, The Rancho San Carlos de Jonata, some 26,000 acres of land, and they purchased a quarter of the Rancho.

With interests in Salinas and Rancho San Carlos doing well, R.T. traveled back to Vermont where he married his cousin, Helen Goodchild, in 1867. Their son, Linus, was born in 1868, the first of five children born to the Buells, but the only to survive to majority.

By 1872 R.T had bought the entire Rancho, and dissolved the partnership with his brother Alonzo. Alonzo then purchased the Rancho El Capitan, from the heirs of Capt. Jose F. Ortega.

The Rancho San Carlos de Jonata covered more than 26,000 acres, from the west to mission Santa Ynez, from the middle of the Santa Ynez River on the south to Zaca Station (north on Hwy 101). The land grant had been issued to Jose Covarrubias and Joaquin Carrillo on September 18, 1845 by Governor Pio Pico, last Mexican Governor of California. Covarrubias and Carrillo used the land only for raising cattle, but R.T. had other plans for the extensive property. The Buell ranch became a model of a fine working ranch, as R.T. had the ability to operate a prosperous horse and cattle ranch and dairy farm. Buell Flat, to the East, grew wheat and other grains on 4,200 acres. To keep the horse and cattle under control, R.T. had constructed 40 miles of board fencing for the ranch, an unheard of thing for those days. Lumber was expensive and other costs were very high.

The San Carlos de Jonata prospered, times were good until the drought of 1876-77, when again the rainfall was so scarce that very little grass grew to feed the stock. Trees were felled so animals could eat the leaves, branches, and even the moss.

R.T went into debt to bankers in San Francisco, so to pay his bills he sold the choicest part of the ranch to his creditors, the Buell Flat/Llano Grade.

By 1892 Mr. and Mrs. Buell had separated, with Helen Buell going to live in San Martin, California. R.T. married Miss Emily Budd in 1892, traveling to Bradford, Pennsylvania where she lived. Of this marriage five children were born, Rufus Thompson Jr., Walter, Odin, Glenn, and Gertrude.

R.T. Buell died in 1905 at the family farm at age 78. He was buried in the family plot, now the parking lot of Pea Soup Andersen's Hotel. His body was later moved to Oak Hill Cemetery, in Ballard.

The oldest son, Linus, continued to manage the ranch until the younger children reached majority. Then they each received a portion of the land, the once great Mexican Land Grant, the San Carlos de Jonata.

Another important family in the Buellton area is the de la Cuesta family, of Rancho La Vega. In 1853, Dr. Roman de la Cuesta and his wife Michaela Cota, the daughter of Francisco Cota, of Rancho Santa Rosa, built an adobe home on the south bank of the Santa Ynez River (near Highway 101). This adobe still stands. The home was built under great difficulty as there were no roads and the lumber that was not hewn on the property had to be brought over Gaviota Pass on the heads of oxen, as even oxen carts could not get through. The adobe home was 13 rooms, and is much as it was when first built.

Dr. Roman de la Cuesta, born in Spain, came to California in 1849. He purchased the Rancho La Vega in 1851. La Vega consisted of 8,000 acres and had belonged to Raimundo Carrillo.

The de la Cuesta's had a large family. Don Eduardo and his wife Eleva Pollard, a granddaughter of William Dana, lived in the family home after his parents. Eduardo and Eleva's daughters were early school teachers in the Valley. Son Samuel married a teacher, Eileen McCarthy, and they lived many years in the adobe on Alamo Pintado. Their daughter Elenita Merrill still resides in the Valley with her husband, King, and four children. Don Eduardo de la Cuesta was instrumental in getting Highway 101 routed through Buellton in 1927.

The area of Buellton began to change rapidly after the turn of the century, with more settlers coming to farm and start businesses. By 1911 Danish settlers were spilling over into the Buellton area, and there was a great need for a post office. William Budd opened a post office and it became an official United States Post Office in 1920.

Stores were being built on the main street of the community, and it was Anton and Juliette Andersen who bought a store from William Budd and opened a restaurant in 1924 called the Electrical Cafe. Juliette brought with her from her native France a recipe for pea soup, and this was the beginning of the now famous Pea Soup Andersen's restaurants. 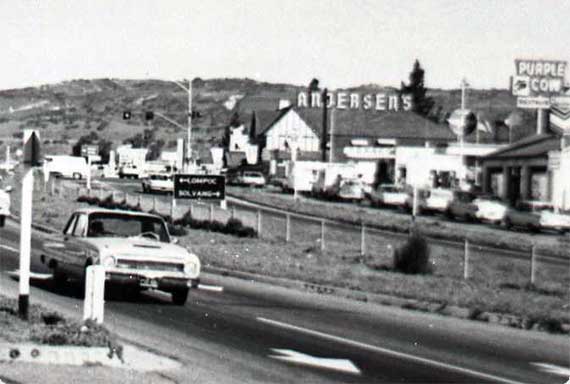 Buellton has always been strategically located as the Gateway to the Santa Ynez Valley, feeding traffic north and south, east and west. In the 1930's Highway 101 was improved as more traffic used the road. In the 1940's Avenue of the Flags was an eight lane road through town, four lanes for local traffic, and four for north and south travel on the highway. In the early 1960's Highway 101 was moved to its current location, and Avenue of the Flags remains as the main street of Buellton.

Buellton became an incorporated city on February 1, 1992. Buellton operates under a five member city council and its form of government. Buellton currently has around 3,900 people, and hopes for more growth for the city.

Rufus Thompson Buell and Roman de la Cuesta, the first men to envision the prospects of the west end of the Valley, probably would not recognize their home today. Yet both were forward thinking people, knew the possibilities of this area, and would probably applaud what Buellton has become.

Compiled by Phyllis Lotz of the Buellton Historical Society

History Of Buellton Article: “What Can You Tell Me About The Origin Of Buellton?”
Article reprinted by permission of The Santa Barbara Independent, (c) 2004