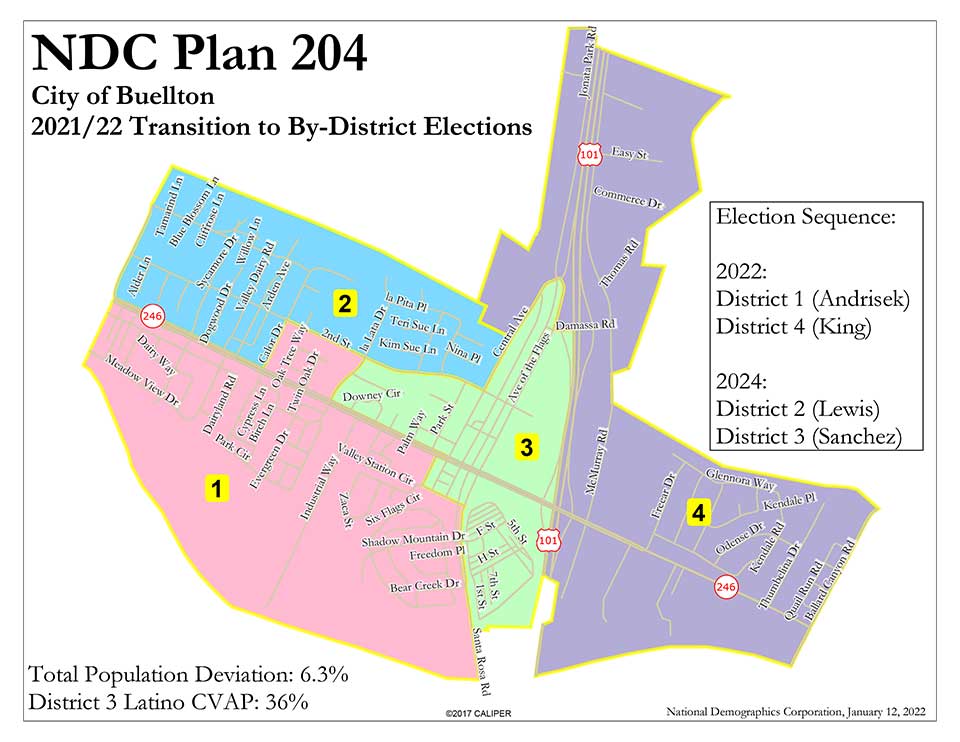 On March 10, 2022, Buellton’s City Council approved Ordinance No. 22-02, which outlines a transition from at-large to by-district elections, with the mayor to be elected at-large. The final map of City Council Districts can be viewed here.

Two draft maps to be considered at the fourth public hearing and first reading of the ordinance to establish District-Based Elections.  Next public hearing scheduled for February 24, 2022.

On November 8, 2018, the City Council adopted Resolution No. 18-22, declaring its intention to transition from at-large to district-based elections for the City Council commencing with the General Municipal Election in November 2022.

At its March 28, 2019 Council meeting, the City Council agreed to transition from Buellton’s existing at-large elections, to district-based elections and entered into a settlement agreement with Southwest Voter Registration Education Project (SVREP) on April 22, 2019.

Most California cities and other public agencies conduct elections on either an at-large basis (each representative is elected by vote of the entire voting population) or district-based basis (the jurisdiction is divided into separate districts and each voter within a district may cast one vote, only for a candidate seeking election within that district).

Buellton has traditionally utilized the at-large election system for Council Members and an elected Mayor. The Vice Mayor is chosen by a consensus of the City Council on an annual basis.

A key reason that the City is proceeding with district-based elections is the threat of significant litigation. Most of the California cities that have transitioned in the last few years have done so as a result of legal challenges brought under the California Voting Rights Act (CVRA). In 2018, Buellton received a Notice of Violation of the CVRA from a Southern California law firm, which has also sent such notices to dozens of other cities. Faced with potentially hundreds-of-thousands, or even millions of dollars in legal fees and damages (as some cities have experienced), Buellton decided to voluntarily proceed with transitioning to district-based elections.

It’s important to note that an allegation of a CVRA violation does not imply that the City or its Council is acting in a discriminatory manner; rather it is an allegation that the overall electoral system within the City is resulting in the disenfranchisement of minority voters. The intent of district-based elections is to give all legitimate groups, particularly minority groups, a better chance of being fairly represented on a City Council.